In their recent update Apple made it known that they have officially rolled out the latest Operating System for their smartdevices. Apple has officially rolled out iOS 11.3 to all its devices including iPhone, iPod and iPad. The update came with lots of change-logs, features, bug fixes, improvements and many more. 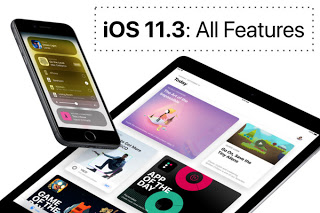 iOS 11.3 has already started rolling out to iPhone X down to iPhone 5s, 12.9-inch iPad Pro to iPad Mini 2, and iPod touch 6th generation. The OTA notification should pop-out on your phone.
iOS 11.3 features

Below is the official change-log details as provided by Apple itself. Every change logs has a little note to explain it better.

Maintains battery health when iPad is connected to power for prolonged periods of time, such as when it is used in kiosks, point of sale systems, or stored in charging carts

When an Apple feature asks to use your personal information, an icon now appears along with a link to detailed information explaining how your data will be used and protected

Business Chat (Beta) – US only

Communicate with companies to easily ask questions, schedule appointments, and make purchases inside the built-in Messages app on iPhone and iPad

Health Records (Beta) – US only

Access health records and view lab results, immunizations, and more in a consolidated timeline in the Health app

Adds ability to sort customer reviews on product pages by Most Helpful, Most Favorable, Most Critical, or Most Recent
Improves Updates tab information with app version and file size

Adds two new Shuangpin keyboard layouts
Adds support for connected hardware keyboards using the Turkish F keyboard layout
Improves Chinese and Japanese keyboards for better reachability on 4.7-inch and 5.5-inch devices
Enables switching back to the keyboard after dictation with just one tap
Addresses an issue where auto-correct could incorrectly capitalize some words
Fixes an issue on iPad Pro that prevented the iPad Smart Keyboard from working after connecting to a captive Wi-Fi access point
Fixes an issue that could cause the Thai keyboard to incorrectly switch to the numeric layout when in landscape mode

Other improvements and fixes

Podcasts now plays episodes with a single tap, and you can tap Details to learn more about each episode

Improves search performance for users with long notes in Contacts

Addresses an issue that could prevent audio apps from playing in cars when the app was in the background.

The Best Dating Applications for iOS