Python Language: Why One Should Learn It and How It Can Help - GiftechsBlog

Python language has become so famous that every field and sector is now a user of it. Even though the other programming languages are not losing their fans, Python is increasing its fan base. Therefore, more and more people are now aspiring to learn Python. Some of the reasons why having a certification in Python can be helpful are discussed below:

Today, almost everything runs through algorithms, whether it is a search engine, social media, chat bots, virtual personal assistants, etc. These sophisticated algorithms are the result of machine learning and it has changed the entire technological scenario. With machine learning, the major programming language that is been used is Python, and one can find many libraries dedicated to machine learning only.

Python is used in data science the most and the professionals in this field are required to have expertise in this programming language. Though there are many other languages like Java, R, etc. which is used for data science, Python remains the favorite. This is because of the diversity it allows in automation technology, along with with the various framework and library available like NumPy, PyBrain, etc.

There are many websites these days like Reddit which are developed using Python language. The main reason why the Python programming language is used in web development is its speed and effectiveness. Using PHP developing a website can take hours, while using Python will take only a few minutes. Also, there are frameworks and libraries like Django and Flask which make the work much easier.

One of the areas that programmers search for these days is the communities. In these communities, the developers and programmers can connect with others from any part of the world and can share their experiences and technologies. This helps them in learning new things about Python and how to solve various issues that may arise while coding.

Libraries are really helpful when it comes to application and website development. One can find any kind of code. Python has a huge number of frameworks and libraries like Flask, Django, NumPy, Scipy, Pandas, Tensorflow, Keras, etc. One needs to concentrate on the logic and objective and the codes are easily available in the libraries.

Lastly, the biggest reason why programmers use Python is the fact that it is a simple programming language. It is a beginner user-friendly language as it does not require a lot of complex codes and syntaxes which are not understandable. Python has an easy and readable syntax and coding which makes its set-up and usage much easier.

Share this post if you found it useful or leave your feedback in the comments section below. 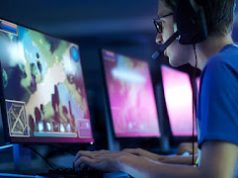 The Importance of Online Casino Software