As Apple continues its secretive development of a car, Samsung is focusing on improving user experience for drivers of existing cars,
according to a report from Slashgear. Samsung Connect Auto was announced at Mobile World Congress in Barcelona this weekend.

The dongle runs on the Tizen OS and is compatible with iOS and Android. It will initially use AT&T’s network in the U.S. As with many other automotive data-tracking devices, it plugs into the OBD-II port, which is usually found under the steering wheel. 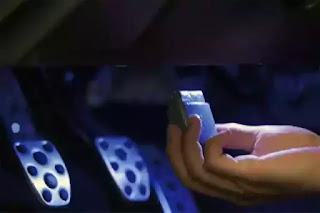 Samsung Connect Auto offers Wi-Fi hotspot functionality while also giving you data on your driving efficiency based on distance, time traveled, and current fuel prices. And it will take the further step of tracking your driving habits with a focus on safety. If you’re a business or parent loaning out the car to others, a geo-fence and speed limit can be set, and the dongle will notify you if either one is violated.

An onboard 4G LTE data connection sends data and location to a cloud server, which offers “Find My Car” GPS functionality. It can also let car owners know if the car has been suddenly moved, for example by a tow truck. Travel logs and expense reports are useful for company cars and those who work on the go. And a “virtual mechanic” monitors the car through the data port and can make maintenance suggestions while anticipating potential issues before they get worse.

Samsung wants to contribute to new insurance models and is partnering with AXA Assistance in offering insurance. For example, occasional drivers could pay only for coverage for the rare instances when they get behind the wheel. The company is also partnering with HERE, Cisco, Ericsson, China Unicom, and IBM, among others, though details of these collaborations have not yet been released.

The dongle comes with its own software development kit (SDK), so third-party developers will be able to make their own Tizen apps. To address privacy concerns, the Connect Auto will also come with the KNOX data and security system that Samsung uses in its Android smartphones.


Samsung wants to add some fun to the connected vehicle infrastructure as well. One feature could be a contest between friends for who could drive the most frugally according to economy metrics. While this sounds interesting, don’t expect to find any sort of built-in speed-based competitions.

The Samsung Connect Auto will find plenty of competition in the form of Vinli, Automatic, AT&T’s ZTE Mobley, and Verizon Wireless’ Delphi Connect. Samsung hasn’t disclosed the price, but look for the Connect Auto’s U.S. launch in the second quarter of this year.