The Robotic Age of Yesterday and Today - Book Review - GiftechsBlog

Today, we talk about our robotic world as if it is a given, but it didn’t happen all by itself. There has been a steady, and recently in ever increasing growth in the science of robotics. Mechanized Machinery is nothing new, it’s been going on for as long as mankind started building sophisticated tools. Today, with the advent of the silicon chip, and the future of computing robotics can do much more than they ever could before.

Artificial intelligence has also increase the capabilities, along with extremely sophisticated sensors. Before retirement I was in the car wash business, and the amount of robotics used in such a simple industry like that is intense. And yes, it has obviously revolutionized the sector. Of course when it comes to automobiles everything these days about the manufacturing of cars is robotic. From the assembly line mechanism which moves the car to the robots which put them together.

Yes, this has been good news, and bad news. It has improved the productivity of manufacturing to an unbelievable and completely unattainable point, which would have been impossible without the robotics. It has also caused much angst with labor unions, where robotics are pit against human beings in manufacturing jobs.

There is a very good book which I think you should read, it was written back in the early 1980s, but it goes to show you that are robotic age has been going on quite a while, and the future looks brighter than ever. The name of the book is;

The author this book is quite an interesting fellow he is studying engineering in Paris, New York, and Philadelphia he has written many books on extremely interesting scientific topics such as the biology of viruses, ultra-sonics, and sound, and galactic formations. He is no stranger when it comes to science.

This book takes you through the various definitions of; “what is a robot?” It also takes you through some of the science fiction stories and the origins and history of robotics. The most fascinating section talks about all the robotics in various industries, along with the future robotics which will be used in the home and office. And I’d like to remind the reader that this was written in the early 1980s. There is also a section on robots in space, and their use or potential future use in medicine.

Not long ago, I had the pleasure of tutoring a robotic system called “The Da Vinci” which was used in telerobotic medical operations. It is amazing that back in the 1980s the folks had conceived of this potential eventuality which is now here today. Indeed I hope you will please consider this and perhaps purchase this book. 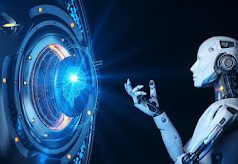 Get Fit and Healthy With a Home Health Monitor

Therapy Documentation Software – Is it Easy to Transition From Paper and Dictation?

The Race to a Paperless Society

Review of the VISION-800 3D Glasses

Get Fit and Healthy With a Home Health Monitor

Job Offer for a Graphic Designer